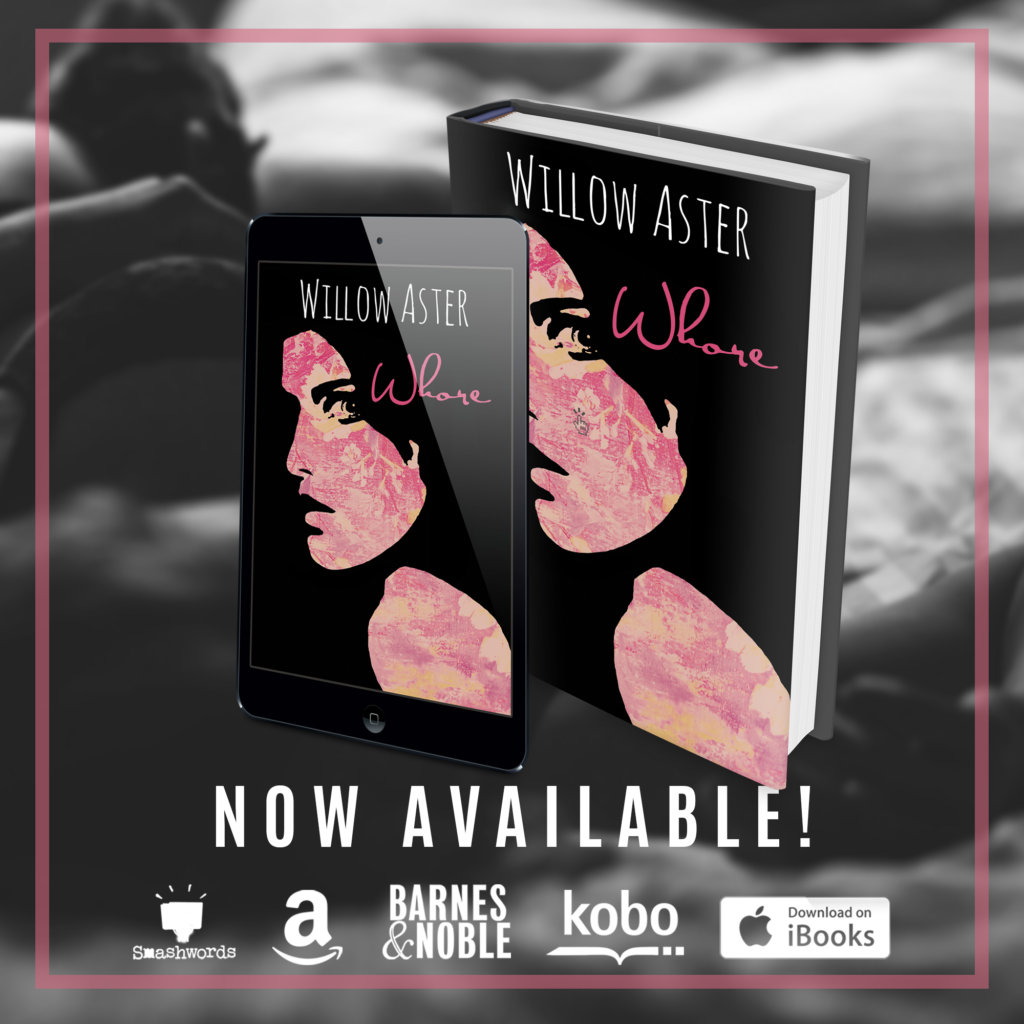 PURCHASE YOUR COPY OF WHORE TODAY! 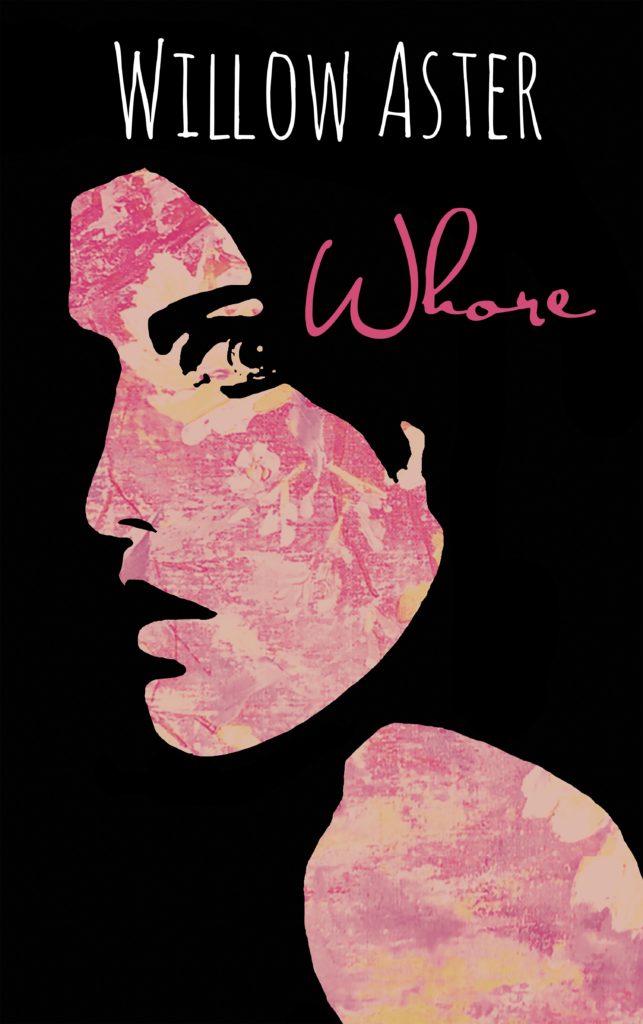 “I need a reason to exist.”
Beautiful, intelligent, independent, strong-willed, wealthy—Lilith Fontenot seems by all appearances, to have it all. But that’s not how the highest paid prostitute in New Orleans sees herself.
A stain on society. A scourge. A waste. Outsider. Prisoner…
Any idyllic dream of the normal life she may have once imagined, Lilith buried long ago. Her only plan now is survival.
But mob boss Nico Santelli and community center owner Soti Christos have not given up on Lilith. Each has his own very specific, very opposing, plans for her, and neither will rest until it becomes a reality.
WHORE is a singularly bracing take on an ancient tale of tireless love, betrayal, and the possibility of redemption.

I take a sudden deep breath and my breasts brush against his chest. The contact surprises us both. I do it again, intentionally this time, trying to gain control in the only way I know how. His neck flushes and he takes a step back. I enjoy the rush it gives me, knowing that I affect him too. “Hey, would you like to come around the corner with me to—” I swallow my surprise and shake my head, holding my hand up before he says anything else. “Please,” he says louder. “What’s your name?” “I am Sotirios … Soti.” “Soti, what makes you think you know anything about me?” He tries to make eye contact, but I focus on a spot just past his left ear. “I just want to help you…” His words trail off. The wind blows my hair forward, a sheet of black coming between us until I smooth the long strands down on either side. I gaze down the street and see a blurry little girl with black hair down to her waist in middle school, standing shy and hopeful in front of a group of girls. “We know what you are,” they said. They hurled spit and names on her and she stood there, taking it, until the teacher came and helped her. Help only got me so far. “You listen to me, okay?” I say so softly he leans in to hear me. “I was born for this.” When my eyes finally land on his again, I know his face will haunt me forever. He looks as bleak as I feel. I clear my throat. “Now, if you’ll excuse us.” With that, I loop my hand through the arm of my next income source, calculating how I can get the most money out of him for the least amount of time. It takes every ounce of willpower I own to not look Soti’s way one more time. Once we round the corner and I know he’s out of sight, all the adrenaline leaves my body, and I’m actually glad to have someone to hold onto. I avoid my reflection as we walk back to the house. I don’t want to know what the rest of the world sees when they look at me. 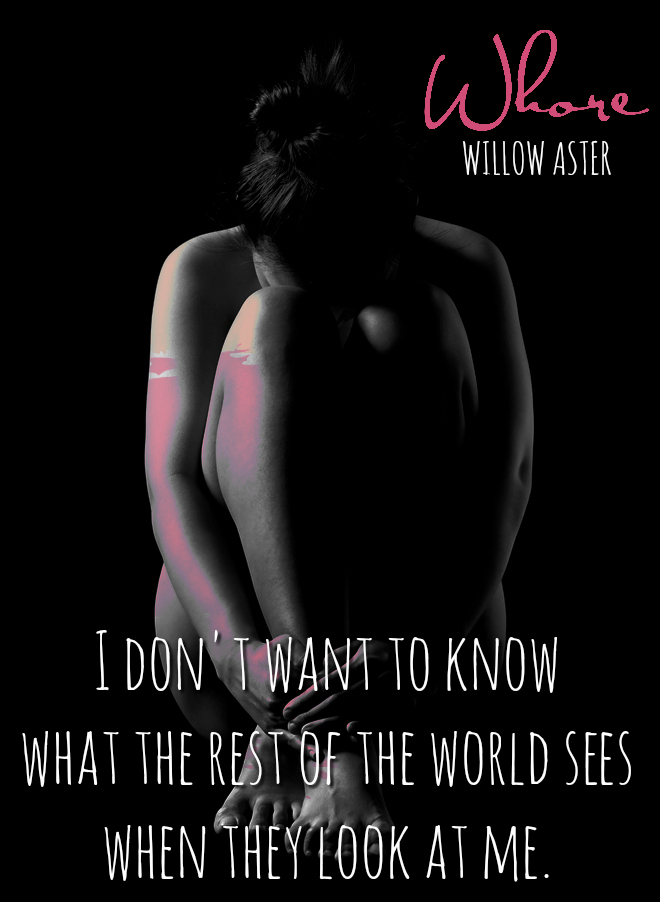 Whore by Willow Aster from Bibliophile Productions on Vimeo. 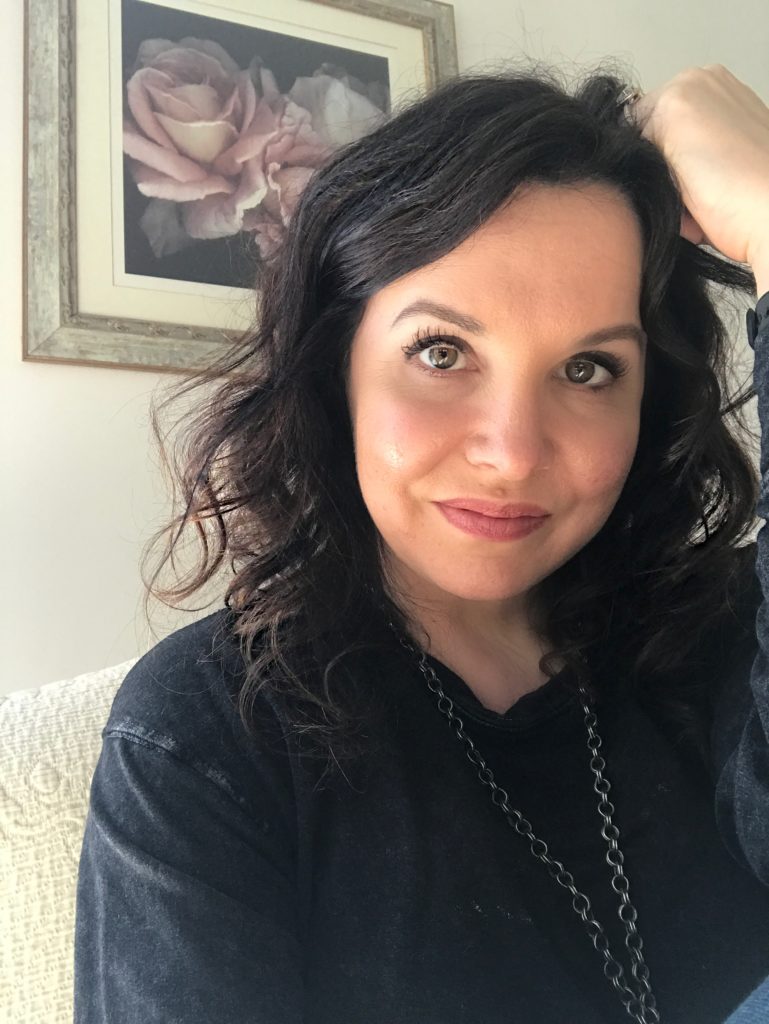 Willow Aster is the author of True Love Story, In the Fields, Maybe Maby, Fade to Red, and the upcoming release, Whore. Willow loves nothing more than writing the day away—anywhere will do. Her husband and two children graciously put up with her endless daydreaming and make fun of her for reading while cooking.
Facebook | Website | Twitter | Instagram 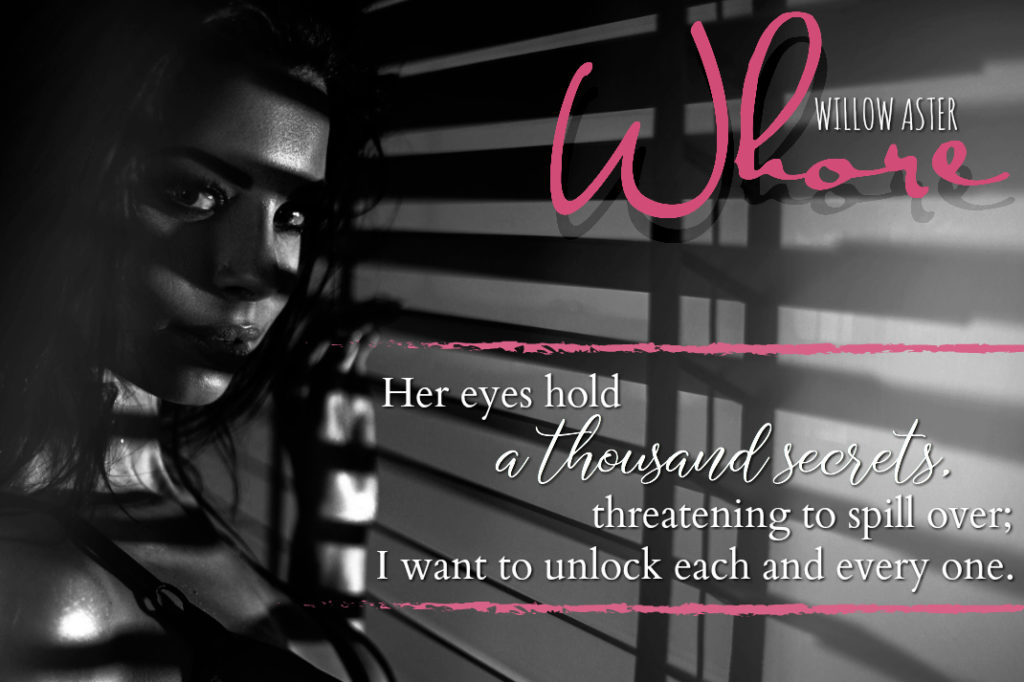 It’s Christmas in Estes Park, Colorado: cozy fires, twinkling lights, soft snowfall, and… murder. The winter holidays in charming Estes Park lulls Winifred Page and her corgi, Watson, into thoughts of spiced chai and gingerbread as they settle into their new home. Fred’s dream bookshop is becoming a reality, and with Christmas only days away, her only concerns are spending time with family, enforcing Watson’s diet, and finding the perfect gifts. The toy store beckons Fred and her friend Katie, who dash in out of the cold, during a shopping spree to discover handmade toys, cuddly stuffed animals… and a dying man on the floor. When Katie’s desperate attempts to save the man ends in her being taken in for his murder, Fred once again dons her detective hat. She puts aside her Christmas list and—with Watson sniffing around—begins a list of suspects. But as quickly as clues point to one person, new discoveries shift the spotlight to another. With Katie’s freedom in the balance, Fred has little time to think about gifts or to enjoy the holiday lights and music. A killer is on the loose, one who became violent in a picture-perfect Christmas toy shop, and Fred and Watson can’t begin to predict what might happen next…

Reading the Cozy Corgi series is pretty much all you need to know about Mildred. In real life, she’s obsessed with everything she writes about: Corgis, Books, Cozy Mountain Towns, and Baked Goods. She’s not obsessed with murder, however. At least not at her own hands (nor paid for… no contract killing here). But since childhood, starting with Nancy Drew, trying to figure out who-dun-it has played a formative role in her personality. Having Fred and Watson stroll into her mind was a touch of kismet.
Connect with Mildred
FACEBOOK
INSTAGRAM
EMAIL
GOODREADS
WEBSITE
SUBSCRIBE TO AUTHOR NEWSLETTER
Thank you for touring with Jo&Isa♡Books Promotions.
JO&ISALOVEBOOKS PROMOTIONS

Denise Reynolds’s tightly controlled life is thrown off kilter when she’s given custody of her young cousins. There are days she has a hard enough time getting herself out of bed, never mind two precocious kids.

If that wasn’t enough, Chris Nolton comes strolling back into town as suddenly as he left it. She’d broken her own rules and given him a chance once before, only to have him ghost on her. But he’s not there for her this time. No, he’s leading the FBI Task Force intent on capturing the kids’ biological father. A man who was sent to prison for manslaughter. A man who was released five years too early. A man who wants his kids back.

The past has a way of repeating itself and once again, Denise finds herself defending the innocent against the evil of world. One wrong decision, one second guess, could have devastating consequences. To protect the most important people in her life, she’ll need to trust the one man with the power to break her.

“WOW! This is such a touching & interesting story. The beginning was totally sad because of the cancer that took Sarah from her family. I was intrigued by the PTSD mentioned and how dogs help those with PTSD. I am so happy that Denise and Chris found their way back to each other and found their happily ever after. Oh Kimber and Kaden are adorable too! FANTASTIC job Tarina! I would recommend this book!” Dawn A Cruikshank

As an Air Force medic, Bree Marks saw the worst the War on Terror had to dish out. Now a physical therapist, she uses her experience to help other veterans heal from their physical wounds; while she battles her own emotional damage.

Bree had better things to do than catch her cheating fiancé in bed with another woman. Jase is something better - for a night at least. For the first time in years, Jase wanted more. When he finds her again, he doesn’t give her another chance to run.

Jase’s protectiveness grates on Bree’s independent nature. She’s dealt with her fair share of alpha-male, door kickers and doesn’t need one telling her what to do now. But as a new danger emerges, Bree and Jase must face their pasts, before someone’s obsession with Bree destroys any chance they have of a future.

"There was nothing about this book that I didn't love. Nothing I would change. I enjoyed every minute of this read. Tarina Deaton has an amazing writing style that really worked for me." Jessica's Totally Over The Top Book Obsession.

Denise Reynolds is used to putting up a good front to show the world a strong, capable woman, but keeps a lot of things buried deep.

Chris Nolton is everything she learned the hard way to avoid — a sexy alpha-male who could charm her out of her pants and work his way into her heart. If history has taught her anything, it’s a deadly combination, but he manages to dig up emotions and longing she’s tried to bury for years.

Being content with her life may no longer be an option, but risking her heart may bring her to her knees.

“Wow! Powerful story about Denise, Chris, Bree & Jase. I was intrigued by the story starting with page 1. Thank you for bringing to light about veterans with PTSD. This is a book I would recommend.” Dawn A. Cruikshank

The last thing Major Jordan Grant expected was to be pulled off his unit’s deployment for a civilian mission. But when Titan calls, you answer — especially when the mission is to rescue the younger sister of your childhood best friend.

Moments away from death, NGO nurse Emme France could only pray for a miracle. The last person she expected to see in the smoke and dust was Jordan Grant, her teenage crush and litmus test of all the men she’d dated ever since.

Lying low at Titan’s exotic Abu Dhabi headquarters while the media furor around her rescue settles, Emme and Jordan explore a mutual attraction that is no longer young and innocent. Days in the desert paradise ignite desire and blur reality…until they return home, where Jordan rejoins his deployed unit and Emme is left alone to reevaluate her life and priorities.

Their passion was forged in the fires of combat. Will the home fires be enough to keep the burn alive?

Tarina has spent her entire life in and around the military - first as a dependent and then as an enlisted Air Force member.

In 2015, a friend challenged her to complete NaNoWrimo. She dusted off one of the many stories she'd started over the years, threw it in the trash, and started all over.

Her debut novel, Stitched Up Heart, released in September 2016. She draws heavily from her own military experience to create authentic characters and to give a realistic perspective of the challenges they face.

Tarina is still active duty and a single mom of four-year-old-twins. Her favorite hobby is sleep. She has delusions of retiring from the military to be a full-time writer and stay-at-home mom.

The Wit & Wonder Agency
By Jo&Isalovebooks Blog - December 18, 2017 No comments: