Bound To You by Skylar Nightingale BLOG TOUR 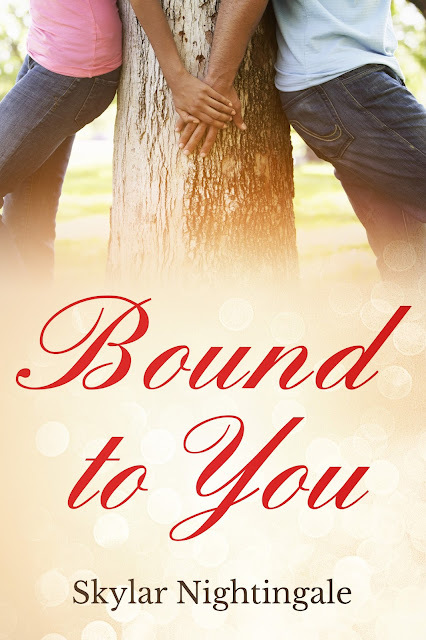 Synopsis
Dear Nina,
Ever since I met you back stage at my concert, you penetrated my heart, and there was no turning back.
Despite the fact that you told me you had a boyfriend, I still wanted you to be in my life, so I asked if we could remain friends. Unfortunately, he shattered your world forever when you caught him cheating on you. Although broken, I vowed to comfort you through it all.
Your beauty’s so profound, inside and out, I wanted you to be in my music video. I was pleasantly surprised when you agreed to do it. During that time, our relationship grew, and I knew I wanted you in my life forever. Then you pulled away repeatedly, allowing the fear of getting hurt again to engulf you.
Now, I’m damaged and alone, and don’t know how much more my heart can take. I need to know, are you going to keep me in your life or avoid another broken heart and run?
I hope you choose me because I’m Bound to You.
Love always,
Terry Rayborn


Terry Rayborn’s bodyguard told us to line up in an orderly fashion so everyone could get their turn with him. As the bodyguard motioned with two fingers for the first girl to move forward, Terry stood next to him. I was the 5th in line. My stomach began swirling with excitement as I got closer. These types of moments only happened in my imagination. I became so eager; I didn’t realize I began to feel nauseated. Running to the restroom, I placed my head over the toilet. I continuously gagged but nothing came out. I guess I’m just experiencing queasiness from this eventful night. I exhaled sharply. Wonderful. One of the most remarkable moments in my life and this is how I spend it. As I gargled with warm water from the sink, I heard a knock on the door and then it slightly pushed opened. It was a guy’s voice.
“Hey, are you alright?”
I gasped. Looking down in amazement, thoughts began running through my mind. It can’t be him. If it is, he really does value his fans, especially since he is bold enough to come into the women’s restroom.
“Can I come in?” he asked.
“Yeah. Sure.” He walked closer with a look of concern.
“Do you need anything?” A confused frown formed in the middle of his forehead.
“No. I’m okay.” I smiled.
He smiled back. I screamed inside. Oh, my goodness Terry Rayborn smiled at me. I couldn’t believe I was behaving this way. Moving closer to me, he reached out and touched me on the shoulder. His touch enticed me to the core, infusing me in places I had yet to discover. I looked down at his hand through wide eyes, then looked back at him.
“I know I shouldn’t be in here but I wanted to make sure you were okay. So are you sure you’re okay?” He chuckled.
“Sure, I’m fine.” I waved my hand as if it’s no big deal. I mean, it wasn’t every day that I got to talk to Terry Rayborn.
He cleared his throat. Looking uncomfortable as he pulled in his lips, he moved his hand from my shoulder. And for a brief moment, I pondered his uneasiness. What would make him react that way?
“Are you okay?” I asked.
“Yes. I think we should head back out there. There are still more fans I would like to interact with.”
“Did I lose my chance to get a picture?”
“Of course not.”
“Whew.” I wiped my forehead with the back of my hand.
He squinted his eyes as if he were trying to read my thoughts. Oh, how I wished I knew what he was thinking.
“Let’s walk back together,” he suggested.
“Are you sure?”
“Why not?”
We walked toward the door, and he opened it for me.
“Thank you.”
As I walked out, I noticed Jalissa’s agitated look. She mouthed the words, “save some for us.”
I lowered my head happily, as I moved to the back of the line. Terry Rayborn resumed his position next to his bodyguard. He smiled as Jalissa moved forward. She gave him a hug and took picture. After she was finished, she waited beside me, at the end of the line.
“Did you have a good time in the bathroom?” she asked in a whisper, sarcastically.
“As a matter of fact, I didn’t. I felt awful for a moment.” I held up my index finger.
“And now?”
“The best I’ve felt in a long time.” I grinned.
“Oooh—I’m telling Jeremy,” she chimed playfully.
“I will probably tell him anyway. Terry Rayborn was just concerned.”
“That’s nice. So he talked to you.”
“Briefly.”
“Aww, why couldn’t I get sick?” We laughed. “So why are you in line if you already had time with him?”
“He said I could still get a picture.”
“Why didn’t you take it in the bathroom?”
“I just wanted to take it the same way everyone else did.”
“Uh huh, hog him up all to yourself,” she chuckled, then jokingly shoved me.
When it was my turn, he began walking toward me. His bodyguard began walking beside him, but Terry’s glance informed him that he was fine. The bodyguard nodded and went to stand in his previous destination. My stomach began to swirl again. His hand was extended as he got closer. I grasped it in mine while the other hand clutched my stomach. He looked at the hand I had placed on my stomach and whispered in my ear.
“Are you okay?”
Feeling his breath in my ear tickled my body, causing me to shiver. I stiffened and looked at him. I couldn’t believe his closeness in proximity. He looked at me and paused as our faces nearly touched. For some reason, he stroked my face with the side of his index finger. I stared in disbelief. This is not happening. His fans were in awe as I heard them whisper among themselves.
He cleared his throat. “I’m sorry; I don’t know why I did that.”
“It’s okay. I can’t say I disliked it.” I smiled as the distance between us grew.
He smiled back.
“So, can I get a hug like your other fans?”
“Of course.”
Initially, the embrace seemed awkward. He fumbled with his arms as if he did not know where to place them, displaying fear of touching something he shouldn’t touch. But that moment quickly faded as his warm body melded into mine, landing his arms perfectly around my waist. Feeling him inhale and exhale slowly, I relished it as I realized we were breathing in sync.

Meet the Author
Skylar Nightingale grew up in Syracuse, NY. She was a shy girl who internalised ideas and events into stories. Skylar discovered her talent when she was in 3rd grade. Her teacher had a writing contest to win a poster of a character from a Dr. Seuss book. The first time she lost, but when she realized what the teacher and the class were looking for, she won every writing contest after that. She continued to write poetry when she moved to Connecticut at the age of 15. When she moved to South Carolina, she entered a writing competition, coming in third against hundreds of writers.
She has been called a talented and brilliant author by the editorial reviewer of the Pages of Sunshine blog. Her first published novel is called “Forbidden Acts.” Skylar Nightingale’s second New Adult Romance was released on April 5th.
When Skylar isn’t behind her keyboard banging out amazing worlds and characters, she can be found spending time with her family, reading, or listening to music.