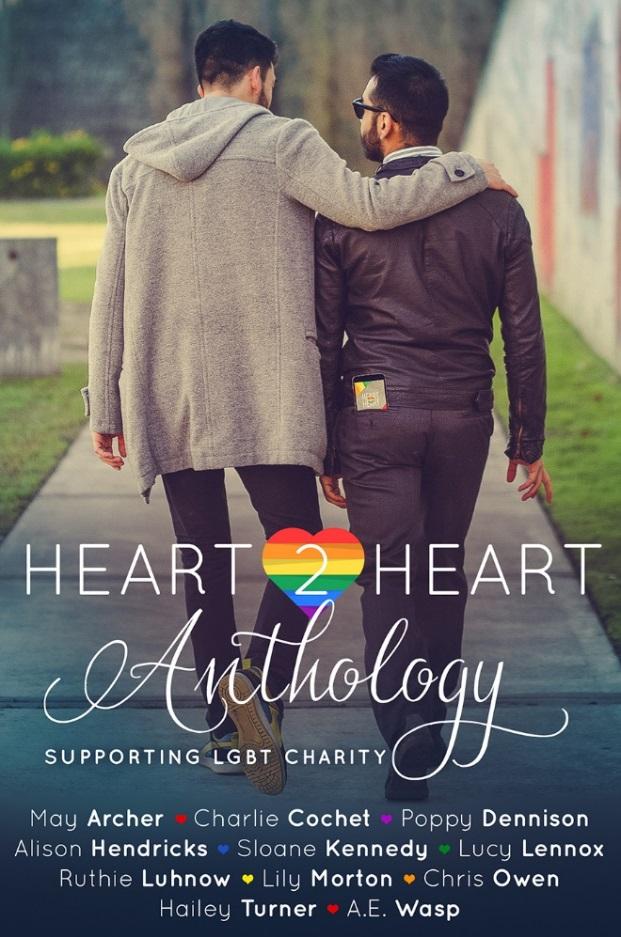 
Once upon a time, a bunch of authors wondered… What if a dating app that guaranteed you a love match broke down just in time for Valentine’s Day? What if you found yourself on a blind date with a random guy who might be your opposite in every single way? It could be a disaster. Or… When the code breaks down, fate just might take over.


Eleven of your favorite gay romance authors have joined forces to light up your Valentine’s Day with a collection of sweet, sexy, silly, and hot short stories, featuring a wacky cast of characters chosen from your reader suggestions! Morticians and magicians, superheroes and spies, lawyers and lobstermen, will all learn that love has nothing to do with algorithms… and sometimes you find it in the least-likely places.


And the best part? All proceeds from this collection will go to the authors’ favorite LGBTQ charities, to ensure that love in all its incarnations will be celebrated and protected every single day of the year!


It will only be available for 90 days, so Tuesday, May 8th will be the last time you can purchase this anthology.

AE Wasp
The Magician and the Mortician


Can you tell us a little bit about your characters?
Alberto (42) is a jaded magician who hasn't had any magic in his life since his long-time partner died five years ago. Mikey (29) is a mortician who finds magic and meaning in life through his work with the dead and their families.


Was writing this story easy for you to do? Or was it a little bit outside of your normal writing zone?
Writing is never easy for me, but once I realized why the characters were perfect for each other, the story happened. Writing a short is difficult for me. I tend to write long.
What were some of the reader submissions that stood out to you, and why?
I was happy to see one person mention a Native American man and someone with Asperger's. The only reason I didn't do that was that I felt I would need a longer story to do it justice. And a 'heartbreakingly beautiful assassin' that I really want to write one day.


Since the anthology is only available for a limited time, (90 days) do you have any plans for your story after that?
I expect these guys to make an appearance in a new project that May and I are working on for the fall!


What do you think of the line-up of authors? How does it feel to be in such great company?
I am fangirling like crazy! It's a dream line up, and I am so impressed with how genuinely wonderful everyone has been. It really made me want to write the best story I could.

Other than your own, do you have a favorite story (or two) in the anthology?
That's so mean to make me pick.

Have you ever set someone else up on a blind date? If yes, how did it turn out?
I didn't, BUT, a long time ago, pre-1994, I did have a guy friend over, and one of my girlfriends dropped by. When she left, Pete said, "I'm going to marry that girl." And he did, and they are still married. So I know the things we write about can happen!


If Heart2Heart were to match you with someone, who do you think you'd get paired with?
OMG. Are we talking functioning app or the wonky one we wrote about? Whoever it is, they'd better know what they're getting into dating a writer, and someone who will call me on my crap. Stockard Channing? That would be nice.


Is there anything else that you think would be fun to talk about?
I love to hear everyone's worst and/or best dating experiences.


EXCERPT
“If you want something done,” Alberto muttered. He turned to Vincenzo. “Do you even have a top hat?”


Vincenzo shrugged and started patting himself down from shoulders to hips. Holding up a finger, he opened his suit jacket and pulled out a flat black disc.


He handed it to Alberto. “Here you go.”


Alberto eyed it suspiciously, then gave it a solid thwack against Mikey’s butt. Mikey jumped, and the hat expanded to its full height. He glared at Alberto.


“This might do,” Alberto said. “Okay, Mikey, sweetheart, I’m going to need you to stand over here. And Vinny, you stand here.”


He positioned them where he wanted them, around a small wooden table. Then he cocked his head, studied the scene, and frowned. “Not quite right.” Hands on Mikey’s shoulders, he guided him to a different spot. He guided Vincenzo with a quick tilt of his head. “Move it.”


He positioned them on either side of the table, then placed the top hat in the middle, near the edge. “Mister…” Alberto trailed off with a genuinely confused smile. “I just realized I don’t know your last name.”


Alberto did a double take. “Grease-wood? What? Really?”


“Gr-EYES-wood. And yes, really.” Alberto looked cute with his nose scrunched up in confusion. Mikey wanted to run his fingers across the laugh lines around his eyes.


“Well, then. Mr. Griesewood, do you have that magic wand?”


Alberto picked up the hat and showed the inside to the audience and then to Mikey.


Alberto turned to Vincenzo. “Pay attention, Vinny. This is how you impress the fellas.” He spun the hat around in his hand, fingers light on the brim. “Mikey, if you will. Please wave your wand over the hat and say the magic word.”


Mikey’s grin was so wide it hurt his cheeks. This was a childhood dream come true, and all signs pointed to some of his adolescent fantasies coming true later as well. He waved the wand over the hat. “Abracadabra,” he intoned solemnly.


With a grin, Alberto reached into the hat. His grin dropped. Brows furrowed, he searched frantically. “Huh. That’s strange.” He held the hat upside down, shaking it.
“Empty.” He showed the empty hat to Vincenzo, who shrugged.


“It worked when I had it. May I flirt with your date now?”


“No, you may not. I think I know what’s wrong.” He turned back to Mikey. “I think I need a kiss. For luck. What do you think?” he asked the audience.


They clapped and cheered.


“What do you think?” he asked Mikey.


With a finger hooked behind his tie, Alberto tugged Mikey closer to him. Someone wolf whistled. Alberto flashed a cheeky grin at the crowd, then flipped up the hat one-handed to block their faces."


We are pleased to be donating 100% of our proceeds to 3 wonderful charities:
The Trevor Project: https://www.thetrevorproject.org/
Bisexual Resource Centre: http://biresource.org/
One n Ten: http://onenten.org/


We encourage all readers to learn more about these groups and consider making a donation of your own. Every little bit helps. 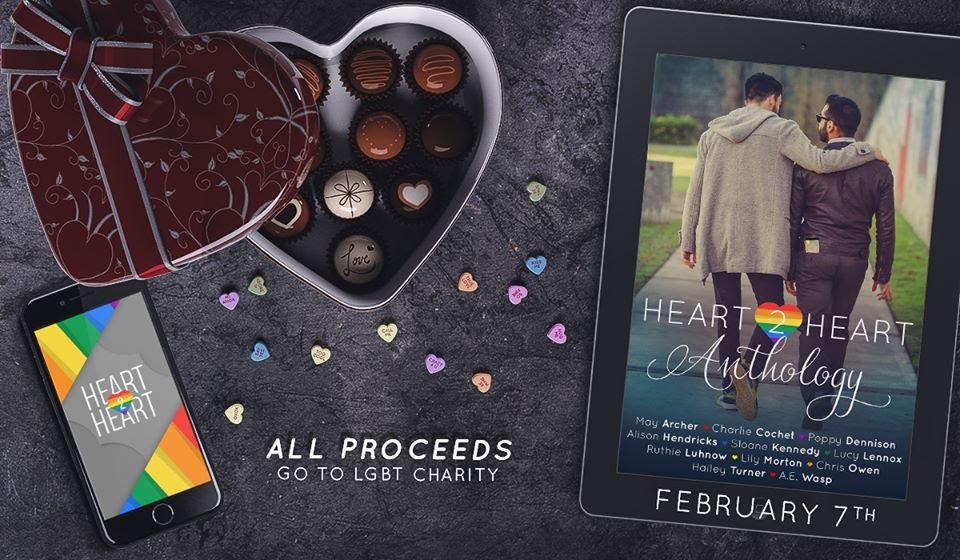 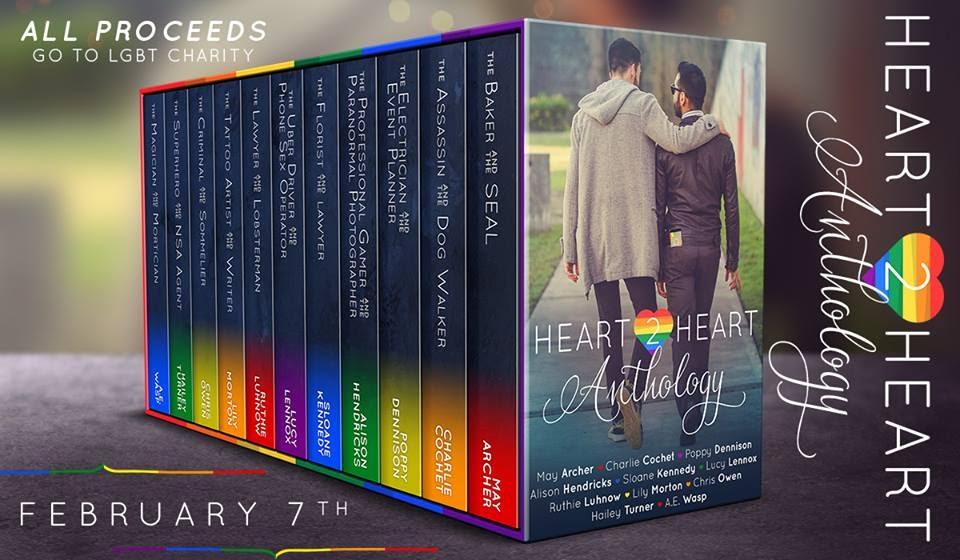 
What began as a random idea quickly turned into a collaborative and completely voluntary effort from 11 authors, more than 130 readers, cover designer, 2 proofreaders, and one cat herder to keep it all together.


Readers were asked to submit ideas for characters, both typical and off-the-wall, and from that list, each author picked 2 seemingly mismatched guys and helped them find love.


May Archer - The Baker and the SEAL


Charlie Cochet - The Assassin and the Dog Walker


Poppy Dennison - The Electrician and the Event Planner


Alison Hendricks  - The Professional Gamer and the Paranormal Photographer


Sloane Kennedy - The Florist and the Lawyer


Lucy Lennox - The Uber Drive and the Phone Sex Operator


Ruthie Luhnow - The Lawyer and the Lobsterman


Lily Morton  - The Tattoo Artist and the Writer


Chris Owen - The Criminal and the Sommelier


Hailey Turner - The Superhero and the NSA Agent


AE Wasp - The Magician and the Mortician