Cover Illustration and Design by Sarah Jo Chreene
Narrator: Joel Leslie
BLURB
Rescued from slavers, healer novice Jaime Buchanan finds himself alone and free in Pyrderi, a kingdom of magic, mythical creatures, and a culture as open and kind as his homeland was cruel and close-minded.
Despite his rescue, Jaime is not left without scars, both mental and physical. Traumatized by his experience and hiding his gift, Jaime struggles to earn his place in the kitchens of Angharad Palace, the heart of Taliesin City. His former life as a student of the healing arts leaves him at a disadvantage in the kitchens, and his damaged state is becoming more apparent by the day.
One day, when necessity and fate intervene, Jaime meets someone unexpected—Prince Maxim, youngest son of the Pyrderian king, a sword master and a devastatingly kind man. Unaccustomed to powerful people with compassion and heart, Jaime flees. A cascade of events reveals Jaime’s hidden talents of healing, and he finds himself not in chains, but at the beginning of a new life.
This swift change of fortune opens Jaime up to new possibilities, including a smitten prince who cautiously courts Jaime, easing him away from his fears and reminding him that compassion and love can make him strong. The winter solstice is quickly approaching, and Prince Maxim shows Jaime the enjoyment and excitement to be found in a land that embraces the ice and cold, and the mysteries of all things magical. He learns to see the man under the royal mantle, and Maxim is more than even Jaime suspected.
The winter solstice is nigh when tragedy strikes, and Jaime learns that his past of grief and sorrow can be a pillar of strength for his solstice prince. If there is one thing that Jaime believes above all else, it is in the healing power of love.
AMAZON US
AMAZON UK
TANTOR
Goodreads: https://www.goodreads.com/book/show/36566371-the-solstice-prince 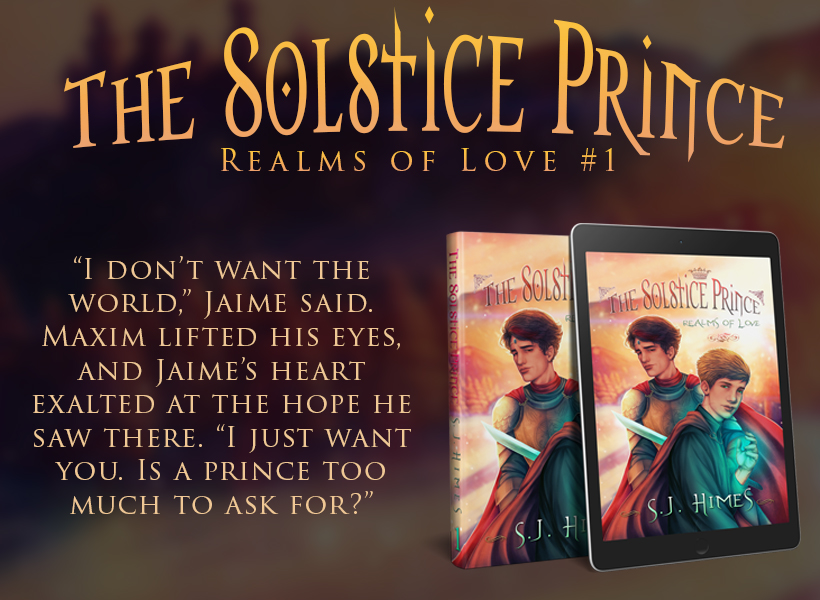 EXCERPT
His eyes were drawn to the wide shoulders of Prince Maxim, the royal speaking quietly to a pair of full healers in their silver and white robes, the edges trimmed in varying hues of green that denoted their ranks and specialties. One of them saw Jaime hovering and pointed towards him with a smile. Prince Maxim turned and grinned wide when he saw Jaime. Jaime smiled back, flushing. The prince said his goodbyes and strode across the room to him. Long legs, a trim waist, a broad chest, and strong shoulders clothed in black leather pants and a brilliant white shirt, topped with a long jacket in rich sky blue left Jaime at a loss for words. The prince looked every inch the royal. Prince Maxim was at his side before he was ready, and Jaime shivered, skin tingling from head to toe when the prince gave him a wide smile and offered his hand. Jaime found his much smaller hand engulfed in the prince’s with his long fingers curling over, holding him firmly. His face burned, and he ducked his head, hair falling over his eyes. “Good morning, Jaime.” “Good—good morning, Your Highness,” he stammered back, and he gripped the hand holding his in an unconscious plea for support. He was holding hands with a prince. His life had taken an unexpected twist. “Please, call me Maxim,” the prince offered, and Jaime gasped, shaking his head frantically. The prince was smiling at him, somehow beyond patient. “I wouldn’t dare! I couldn’t, Your Highness,” Jaime burst out, heart racing again. “It’s not allowed.” Prince Maxim drew closer, their joined hands between them, and he gave Jaime a slow perusal, taking in his wide eyes, flushed cheeks, and no doubt able to see the galloping pulse in his neck. “There is no one to gainsay you for the privilege. I do not mind. Please, it would be an honor for you to use my name.” “Can I—can I think about it?” He couldn’t believe he just said that, and he nearly bit the tip of his tongue off snapping his mouth shut. Prince Maxim chuckled and turned them both, tucking Jaime’s hand in the crook of his elbow. “While you’re thinking about it, how about I give you a tour of the castle? Something besides the kitchens and servants’ halls? Would you like to see the library? Do you like to read?” “Master Eames wanted to talk to me…” “I’ve been ordered to return you promptly after midday by Master Eames, along with strict instructions not to overdo it.” The prince’s charming grin never fell away, and he seemingly saw nothing amiss in a healer ordering about a royal. Master Eames was a distinguished healer, surely used to getting his own way, and Jaime had no desire to run afoul of the healer’s orders either. Prince Maxim continued, “Now what about some breakfast and then on to the library?” “I love to read. I would love to see the library.” The idea of the prince taking him to personally see anything was spinning about in his mind, making him feel dizzy, and leaving him glad for the strong hand holding onto his.

I'm a self-employed writer who stresses out about the silliest things, like whether or not I got my dog the best kind of snack and the fact my kindle battery tends to die when I'm at the best part in a book. I write mainly gay romance, erotica, and urban fantasy, with occasional forays into contemporary and paranormal. I love a book heavy on plot and character evolution, and throw in some magic, and that's perfection. My current series are: The Beacon Hill Sorcerer, Bred For Love (as Revella Hawthorne), The Wolfkin Saga, and the epic fantasy romance series Realms of Love. My last two novels in the Beacon Hill Sorcerer won 3rd Place in the Gay Fantasy category for the 2016 Rainbow Awards.
I live in New Orleans, where the personalities are big and loud and so are the bugs! New Orleans is rich in cultural history, and the flavor and music of the City is impossible to hide. Before that, I lived all over the United States: Tampa, Western Massachusetts, Indianapolis, and on and on.... I'm a nomad, and I've yet to find a place that calls to me strongly enough to become home. My faithful travel companions are my dog Micah, the numerous voices in my head who insist they all get put on paper, and the wind at my back.
Facebook: https://www.facebook.com/SJHimes/
Website: https://www.sjhimes.com/en
Joel Leslie/Narrator
Joel Leslie is a UK transplant, growing up with American parents in a British commonwealth. A classically trained actor with an MFA in theatre from USC, he is often cast for his unique ability to deliver native, authentic combinations of American and British sounds. His great range and ability to bring characters to life with honesty, wit and versatility delights producers and listeners alike.
He is proud to have a strong following with m/m listeners and an ongoing relationship with some of the finest writers in the genre. He loves that every day he gets to share these beautiful, inspirational and empowering GLBT characters with the world.
His authors have praised him as “a narrator among narrators, a man whose ability to create different characters rests on the power of his voice and his impeccable delivery,” and a “true delight…" "his professionalism, good humor, and charm make him a dream to work with,” "Anyone else would only be second best”.
Joel has consistent access to his home studio for all production needs. When not in the booth he spends his time chasing after two loquacious wiener dogs.
http://www.joelleslienarration.com/
GIVEAWAY
a Rafflecopter giveaway